Le Cercle des Villégiateurs is a work of art installed in front of the Community Centre of Farm Point. It has been created to remind us of a piece of Chelsea history. 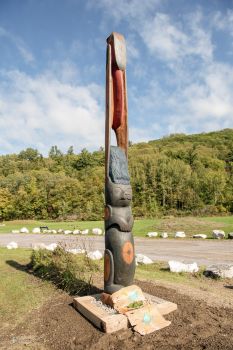 "The tree that tells us about the Bear Mountain"

The fourteen-foot-high totem pole, created by artist Denis Charrette, is located at the Hollow Glen Community Centre. The art piece pays tribute to the First Nations and to the ancestral nature of the sector.

The artworks presented above are part of the The "Of Hills and Water Route" of the MRC des Collines-de-l’Outaouais. This public art circuit highlights the historical and cultural heritage of the seven municipalities in the MRC's communities. Click here for more details.

Site of the tombstone of Private Richard Rowland Thompson, whose heroism during the war was highlighted by the Queen's scarf of honor, crocheted by Queen Victoria herself, and of which there are only eight examples in the world.

Interpretation site with the restoration of the bell tower of the old church, 2 park benches, 2 interpretation panels, and a landscaping project

A memorial site that includes 68 funeral monuments arranged in irregular rows, and more than 200 graves. Several monuments are grouped on family lots. The Old Chelsea Protestant Cemetery is set back from Old Chelsea Road in the heart of the centre-village.